It’s not uncommon for airports to claim that significant aircraft noise issues simply don’t exist in the areas in which they operate, that it’s just a few individuals practicing NIMBYism. As proof they offer metrics: the number of voluntary noise complaints to the airport over some arbitrary time frame. Here’s an example of how these metrics are typically reported. Here’s another example from Phoenix-Mesa Gateway.

It certainly looks comprehensive and scientific, yet no statistician would consider this a credible methodology for accurately measuring public sentiment over time. There are many reasons why residents might not officially complain about aircraft noise, the most obvious being that they might not know who to contact, or they might believe (correctly) that complaining will make no difference. Regarding the latter, it may be that they have already complained in the past, and have simply given up. I spoke to residents who were not counted in Phoenix-Mesa Gateway’s survey simply because these residents contacted the operators of the offending aircraft directly instead of contacting the airport. Ultimately, the methodology used by airports suffers from massive undercoverage; the low non-probabilistic sample sizes are highly unlikely to accurately represent the sentiment of millions of residents, and a few missed complaints can significantly alter the results.

This is not to say that airports shouldn’t track complaints or that such metrics have no value; a sudden dramatic increase likely corresponds to some significant change at the airport, as when Sky Harbor went from receiving a few hundred complaints in 2013 to tens of thousands by 2016—all due to NextGen flight path changes that involved no public notice or input. However, while residents who complain are likely representative of a much larger group, the reverse isn’t necessarily the case: that residents who don’t complain don’t have issues. Yet this is exactly what airports claim, and their conclusions assume that residents with noise issues will continue complaining month after month, year after year, even though such complaints result in no substantive action.

So why do airports measure public sentiment this way? Certainly there are economic considerations. It’s cheap. It’s easy. It’s passive rather than active. There’s historical precedent; it’s how they’ve always done it. But most of all, it does exactly what it’s designed to do: significantly underrepresent noise issues in the community. It has the veneer of science without actually being scientific. If airports were serious about gauging public sentiment, they would at the very least actively reach out and contact a random sample of those who already complained to ask if there are still noise issues. It wouldn’t be a tremendous burden to make a few dozen phone calls every year to see if public sentiment truly corresponds with the conclusions drawn from their complaint metrics. If airports were truly serious about aviation-based noise pollution, they would commission independent periodic statistical surveys. Even one such survey would provide a baseline with which to attenuate the conclusions drawn from their voluntary complaint methodology.

Here’s what real science looks like. These surveys were conducted by the late and renowned pollster and Arizona State University professor, Bruce Merrill, at a cost of 22k—a fraction of the billions of dollars airports are alleged to add to local economies. The cost could easily be absorbed by airport operational fees, and airports do not require FAA approval to impose such fees. Indeed, increased fees at Sky Harbor are what pay for Phoenix’s NextGen lawsuit against the FAA. 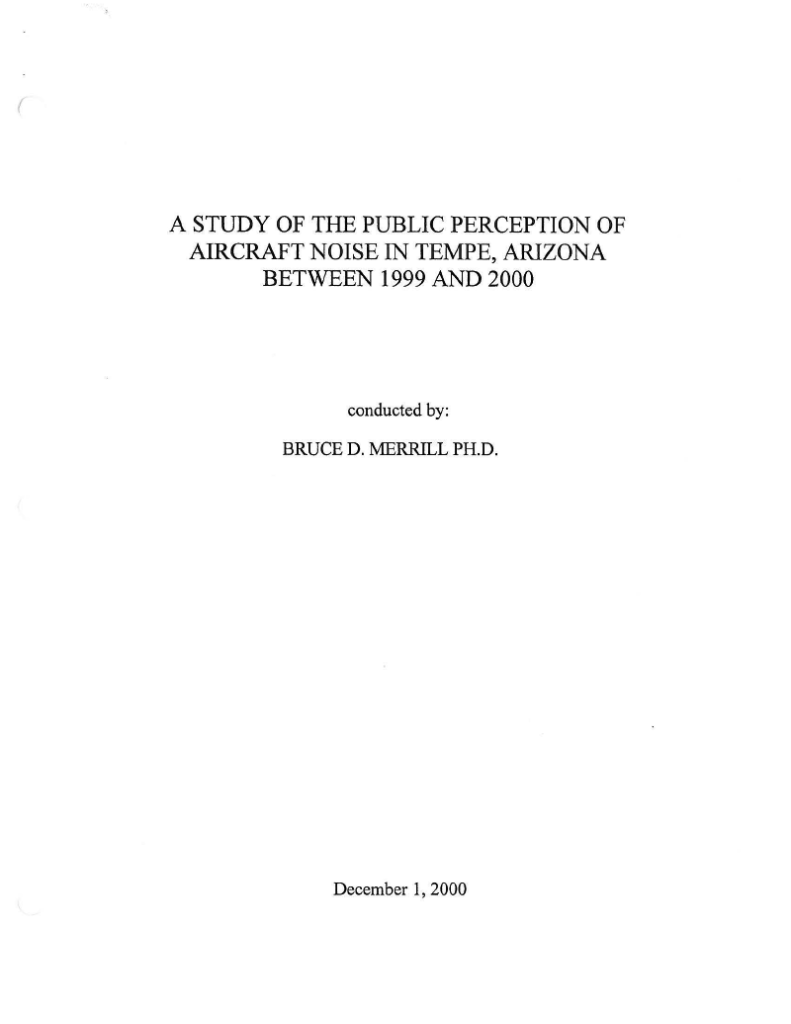 Has your airport commissioned one of these? Why not?

Tempe also has a convenient noise complaint system that puts those of many airports to shame. One can submit a complaint by voice or online, and receive a tracking number for confirmation and to check the status. It’s worth noting that “Aircraft Noise Complaint” is first in the list of complaint types, suggesting that aircraft noise is indeed common, if not the most common, complaint that Tempe receives. Comparing Tempe’s multivectored approach to measuring public sentiment with the half-hearted efforts used by airports, we might reasonably conclude that airports are following a strict policy of “don’t ask, don’t tell”; they won’t ask you about noise issues, and they certainly don’t want you to tell them about any.

If aircraft noise is not an issue, why is it first on the list?

It’s no surprise that airports lack credibility when measuring their own impact on the communities in which they operate. Airports rarely address noise issues; rather, they manage them. It’s public relations—not progress. Airports are not in the noise mitigation business; their loyalties are first and foremost to themselves, followed by the aviation community, and with hosting municipalities perhaps a distant third. This ordering of allegiances is further demonstrated by Sky Harbor’s NextGen noise issues; the airport was well aware of the impending flight path changes but failed to notify the city of Phoenix, the public, or any other stakeholders.

Comparing Tempe’s multivectored approach to measuring public sentiment with the half-hearted efforts used by airports, we might reasonably conclude that airports are following a strict policy of “don’t ask, don’t tell”; they won’t ask you about noise issues, and they certainly don’t want you to tell them about any.

It’s also not surprising that airport methodology is designed to underrepresent aviation-related noise issues. In this regard, airports are merely taking their cue from the FAA itself. The principal metric the FAA uses to determine unacceptable noise levels is known as the Day-Night Average Sound Level (DNL). As with all averages, it produces a single metric that attenuates all outliers—the very things we’re trying to measure. So instances of noisy aircraft are cancelled out by instances of calm. With DNL, even living right on an airport runway wouldn’t necessarily meet the FAA’s threshold for significant aircraft noise exposure—providing the runway is sufficiently quiet at times to average out all the noise. It’s easy to understand why this methodology lacks credibility. To use a medical analogy, imagine you’ve just suffered your first heart attack, yet your doctor tells you that you’re in fact perfectly healthy, because the doctor averaged out the number of attacks you’ve had over the year, and the result shows no indication of any significant heart issues. The FAA must be amazed that it’s managed to keep this farcical DNL methodology going for as long as it has. Of course the FAA has kept it going because it does what it’s designed to do: turn noise issues into non-issues.

…even living right on an airport runway wouldn’t necessarily meet the FAA’s threshold for significant aircraft noise exposure—providing the runway is sufficiently quiet at times to average out all the noise.

Fortunately, it seems that DNL’s days are numbered, and now the FAA is trying to come up with an alternative metric that will pass political scrutiny while achieving the same result: minimal impact to the aviation industry. My guess is that the FAA will go to the opposite extreme, from a simplistic weighted average to a formula that’s so complicated it will be difficult for anyone but experts to discuss, understand, or implement.

Ironically, it’s the FAA itself that’s responsible for the critical mass of political opposition that’s finally resulting in change. The FAA’s NextGen program, wielded with all the finesse of a sledgehammer, has been a catalyst to groups that have been fighting aviation noise pollution for decades. Had the FAA been more conciliatory and less autocratic, it likely could have kept the status quo noise issues going indefinitely. The suffering that residents are experiencing under NextGen will hopefully pave the way for changes to the FAA’s mandate, forcing the agency to finally balance the interests of the aviation industry with legitimate community concerns. That the FAA has to be dragged kicking and screaming to exercise the authority it already has is a testament to the phenomenon of regulatory capture and the revolving door that exists between industries and the government agencies tasked with regulating them.