It is difficult to get a man to understand something, when his salary depends upon his not understanding it. — Upton Sinclair

A strange thing happens when you complain about excessive aircraft noise. Naturally, you become a problem for those who profit from aircraft at your expense. Less obvious, you become a nuisance to those who share a responsibility in regulating aircraft. But what’s completely unexpected is the vitriol you will receive from other victims of aircraft noise pollution. Perhaps they worked in the aviation industry and are now retired. Perhaps they have friends or family still in the industry. Perhaps they’re veterans and fondly recall that day when a military gunship saved them from certain doom. Whatever the case, it’s an unexpected irony that some of the people you’re trying to help will despise you for it.

Here’s a good example of what I mean. Reading this blog, you would think that the Pilgrims landed on Plymouth Rock in helicopters. You would think that George Washington crossed the Delaware in a seaplane. I can do no better than quote the author: “…the sound of airplanes flying is what makes up the United States of America…” 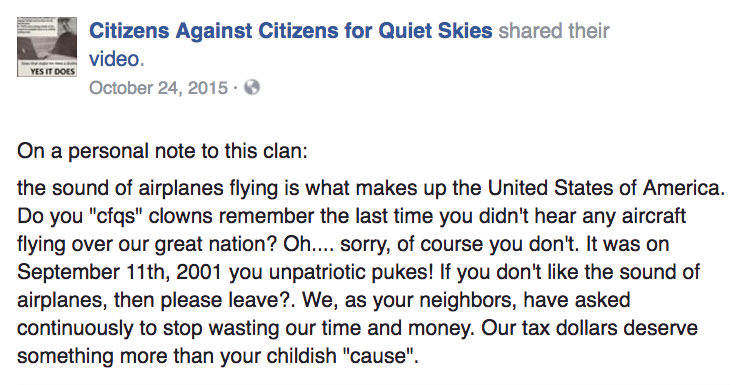 Really? If I had to single out that which is quintessentially American, I would chose things like: liberty, equality, democracy, meritocracy, transparency, dignity, privacy, justice, fairness, etc. Let’s just focus on the last two: justice and fairness. I mean without these values, we might as well just pack it in as a nation. And there’s simply nothing just or fair about aircraft being permitted to do what automobiles (or anyone on the ground) cannot: disturb the peace at will, nonstop, day or night. If a fleet of rumbling garbage trucks were to circle your home all day every day, you would call the police and put an end to it. But give those garbage trucks wings, elevate them a few thousand feet, and they become angels of commerce and utterly unassailable.

Meanwhile, homeowners face ever-increasing restrictions on what they can do with their property. Property ownership is in fact an ever-dwindling bundle of rights in exchange for an ever-expanding tax burden. And wherever you happen to be, there is likely not one but multiple overlapping noise ordinances from all the various municipalities in which you reside (federal, state, county, city, etc.). Here’s the noise ordinance for Pinal County—the county CAE’s planes fly over with impunity. This ordinance places all kinds of restrictions on its citizenry, including this one…

No person shall operate either a motor vehicle or combination of vehicles at any time upon any street or paved surface or under any condition of grade, load, acceleration, or deceleration in such a manner as to exceed the following noise limit…

It shall be unlawful for any person, including the owner or manager of any business, to operate or permit to be operated any radio receiving set, phonograph, musical instrument, and sound producing mechanism, at any time in such a manner as to permit the same to be heard at a distance of more than one hundred twenty-five (125) feet from the property line or motor vehicle where such radio receiving set, phonograph, and or sound producing is located.

Read that? You can’t even play your radio without your actions being regulated—that is—unless you happen to be flying. Then there are no noise restrictions whatsoever. NONE. If you’re flying a helicopter, you could, if you wanted, blast Wagner’s Ride of the Valkyries in a loop all day every day while you extend your middle finger out as far as it will go in the general direction of Pinal County’s seat of government. 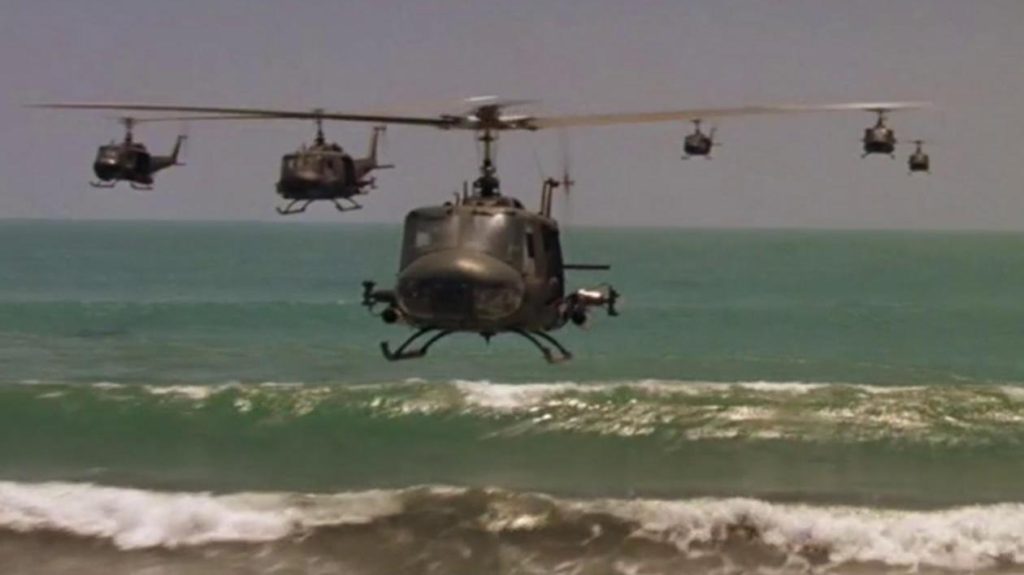 A common argument from aviation extremists is of the “first in time, first in right” variety. The argument goes like this: “The airport was here first, you moved next to an airport, therefore you should have known what to expect, and your rights are superseded by those of the airport and its patrons”. But Gold Canyon isn’t near an airport; it’s not even in the same county as Falcon Field. Moreover, Gold Canyon never had a problem with Falcon Field prior to CAE deciding to send its vast fleet of noisy toxic-lead-spewing planes over us, all day, every day. Gold Canyon was “first in time, first in right” long before CAE, Falcon Field, and Mesa decided to fundamentally alter the character of Falcon Field from a local community airport serving local community pilots to a major base of operations for the largest flight school in the world.

First in time, first in right? Even when it’s a horse on a major highway?

If we were to apply the “first in time, first in right” argument equally across the board, then horses should be permitted to go wherever they want, whenever they want, on any road, in our busiest city centers, because people on horses existed long before people in cars. Roads are often built before the communities that spring up around them. But no one is arguing that automobiles are therefore immune from all noise ordinances. Ultimately, there isn’t a single unfettered right in our Republic; all rights end where other rights begin. Even our right to “free speech”—enshrined in the Bill of Rights in our Constitution—is not without limits. Try telling bomb jokes to a TSA agent at an airport security checkpoint and you will soon understand this. That aircraft should enjoy an absolutely unfettered right to make as much noise as they want, anytime they want, anywhere they want, is a right unparalleled in history. Even if you’re a pilot and biased toward your passion for flight, you should be able to fathom the inherent unfairness of your incredible immunity from all noise ordinances.

Perhaps the second most common argument from those who don’t appreciate our efforts is a variation of “it doesn’t bother me”. But chances are that some noisy activities do bother you. Perhaps it’s your neighbor’s barking dog, or late-night parties, or the sounds of power tools and other construction after dark, or your neighbor’s aging heat pump, or the guy who feels the need to lean on his car horn at all hours. Point is, even if you don’t personally hear aircraft noise or it doesn’t bother you, you should be able to empathize and sympathize with those that do. You may not hear the noise or feel bothered by it, but the family you try to sell your home to may feel otherwise. Certainly you should understand that your property values are affected by it…

With the advent of drones, unmanned aerial vehicles (UAV), unmanned aircraft systems (UAS), remotely piloted aircraft (RPA), or whatever you want to call them, the skies are going to get a lot busier and a lot noisier. Take a look at this video for a glimpse of the future. Forget about the occasional drone; think swarms of drones. 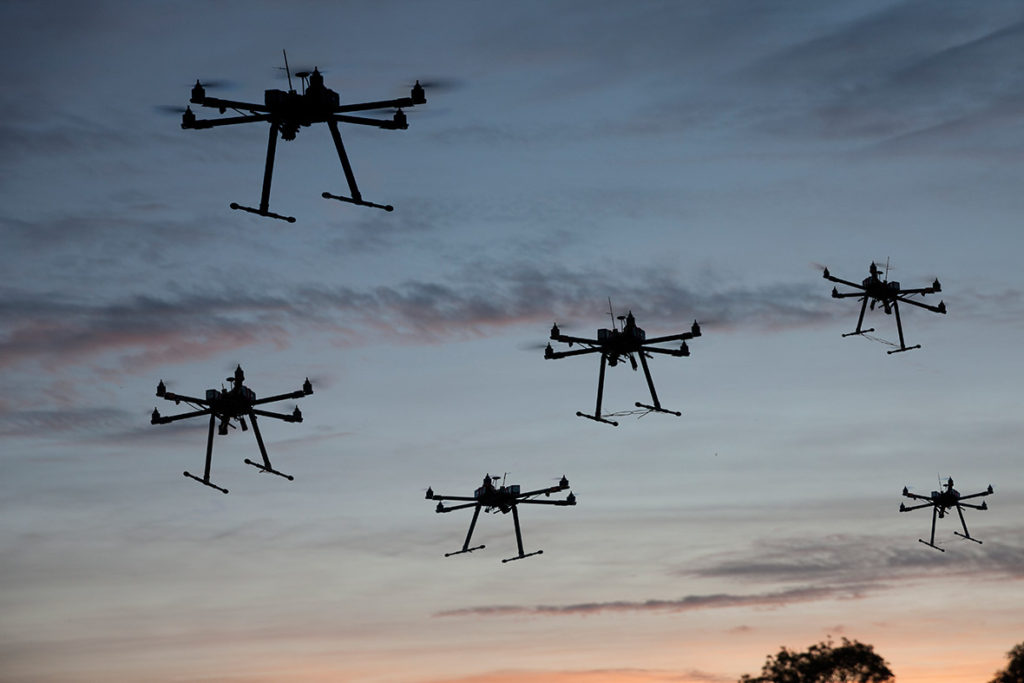 Coming to a backyard near you.
Noisy? Invasive? Yes they are! But that’s OK because they’re flying, right?

Even those who don’t seem to have a problem with noisy planes flying over their homes all day every day may object when their neighbors’ noisy drones start loitering around without restraint. It is my sincere hope that drones will break the cognitive dissonance of those who don’t understand that the objections against noisy manned aircraft are fundamentally no different than those against drones. Citizens for Quiet Skies have no problem with drones, planes—heck even satellites—flying over them, providing they’re all held to the same standards of fairness and decency we require of those on the ground.