Ever wonder what would happen if you reported a flight safety violation to the FAA? Forget about Hollywood movies like Flight and Sully that portray commercial passenger plane mishaps and no-holds-barred investigations. Here’s a real-life example detailing the impossible hurdles the FAA demands before they’ll take action against a pilot.

Years ago, I witnessed a small piston-driven single-engine aircraft fly at an unlawfully low altitude over the community. It was neither landing nor taking off, but simply looping and buzzing the community with no regard for those below. As this was not the first time, I contacted the FAA to report it.

I even quoted the exact law that was violated…

So what happened? Well first off, I had to contact the FAA twice, because I never got any confirmation the first time I submitted my complaint. When I finally did get a confirmation, it was just a generic message with no complaint number and no way to track its status…

Nothing says “We don’t care!” like a generic acknowledgment with no tracking number.

Some weeks later, an investigator did eventually contact me. Now when you imagine this investigator, don’t imagine someone like a detective from the police with a “badge” or “shield”. Don’t imagine someone like a federal air marshal. Instead, imagine some retirement-age guy who is likely a pilot himself, and spent his career in aviation one way or another, very much a part of the system you are now at odds with. Imagine, if you will, an almost volunteer service—a fellowship of pilots policing themselves.

The investigator contacted me via telephone and asked questions. He was particularly interested in how I was able to get the ADS-B transponder data. I explained that I got it from the aircraft itself, and that I simply received and decoded the signals using an ADS-B dongle and some software. I emailed him a picture of the specialized antenna on my roof designed specifically for receiving the 1090 MHz ADS-B signals. While I am by no means the first person to do this, the investigator had never encountered anyone before who had bolstered a complaint with such hard evidence. Even still, he ominously wanted to know if I had taken any photos—as if photos were somehow more compelling than the aircraft itself telling you that its pilot had violated the statutes.

Weeks later, the investigation concluded with no formal sanctions levied against the aircraft owner… 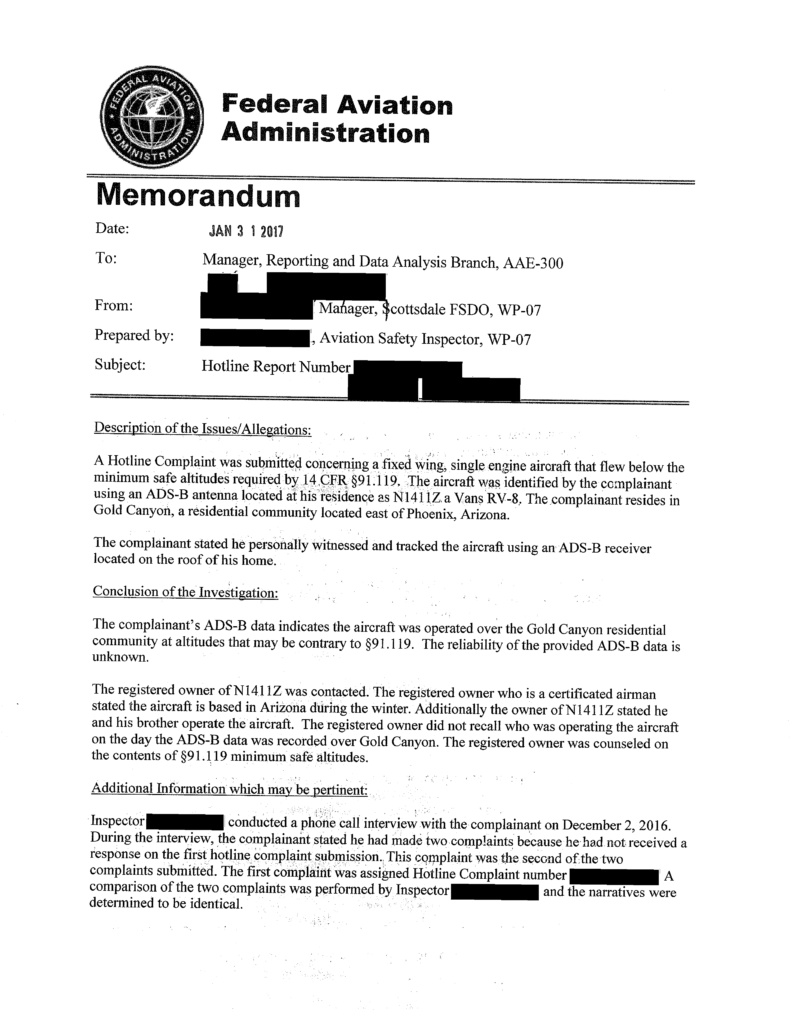 I want to focus on one part: The reliability of the provided ADS-B data is unknown. If there was any doubt about the ADS-B data I provided (and no one was disputing its veracity), then why didn’t this investigator bother to independently confirm it? Did he contact the local airports? Check their ADS-B logs? Check their radar? Anything? Anything? Nope. Nothing. Apparently, that was my job! Who’s the investigator here? He or me? I had already presented this violation on a proverbial silver platter. If this much detail was provided to police for every crime, detectives would be out of a job.

Clearly, the hurdles the FAA requires to take action are designed to be impossible to meet by any average person. And the evidence I provided was well above average. And even that wasn’t good enough. Imagine how difficult it would be to prove all this before the advent of ADS-B dongles and tracking services like Flightradar24. Imagine trying to make your case before online map services like Google Maps. This is all by design; the laws were written well before this technology, and didn’t anticipate such technology being in the hands of average homeowners.

Even still, he ominously wanted to know if I had taken any photos—as if photos were somehow more compelling than the aircraft itself telling you that its pilot had violated the statutes.

Even the statute itself is designed to be difficult for a pilot to violate. Flying too low? Doesn’t matter—so long as the aircraft is 1,000 feet above the the tallest thing within a 2,000-foot radius. So if your roof is the tallest thing, then the pilot is free and clear. Never mind that a propeller-driven piston-engine aircraft flying that low would sound like the aircraft’s about to crash into your home, and would literally shake things off the shelves. The FAA couldn’t care less. The rules were bought and paid for by lobbyists to favor pilots. And, ultimately, what good is any law if it’s not enforced?

The complaintant’s ADS-B data indicates the aircraft was operated over the Gold Canyon residential community at altitudes that may be contrary to §91.119. The reliability of the provided ADS-B data is unknown.

And speaking of enforcement (or the lack thereof), ADS-B transponder data is already being recorded by airports as well as commercial service providers of flight data. We already have map data of every possible metric we can imagine, from populated areas to the tallest structures in those areas. There’s no reason why all this data couldn’t be systematically analyzed to detect violations and issue fines, not unlike myriad traffic enforcement cameras that the earthbound must contend with. So why hasn’t the FAA done so?